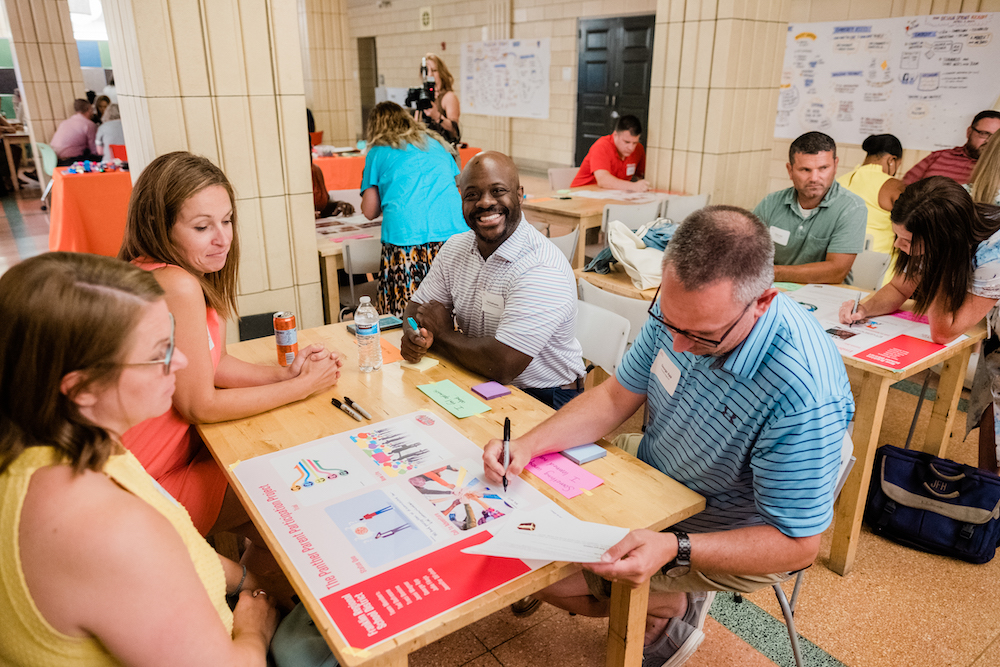 Photo above, from the PAA.20 design sprint wrap-up event, by Ben Filio.

When Avalon Elementary School parents hear about the Parents as Allies in Making workshops, their first thought may well be this: Our school has thought of everything.

Here’s how this new program works: Through a series of three free courses, parents can learn to help out as certified coaches at Northgate School District’s maker space. The courses are offered on multiple evenings to suit parents’ busy schedules, with childcare and meals provided.

Once they’re trained, these parents can help out at the maker space on whatever schedule works for them. This influx of volunteers helps keep the maker space humming along. And in the process, it helps parents become more meaningfully connected to their child’s school community – something that can help after the distance and disruption of the pandemic’s impact on schools and families.

HACKING THE CHALLENGE OF PARENTAL ENGAGEMENT

This creative idea is one of dozens that emerged from the recent Parents as Allies 2.0 design sprint. This process, part of the second phase of the larger Parents as Allies (PAA) initiative, brought together teams of educators and parents from 22 school districts in southwestern Pennsylvania.

The brainstorming for PAA 2.0 kicked off on April 1 at the Heinz History Center during an energizing day-long workshop. Each school district team was a mix of parents, school administrators and teachers, many of whom had never met one another before. A total of 82 parents and 64 educators from eight counties participated.

Nine of the 22 districts had participated in last year’s PAA (now referred to as PAA 1.0) design sprint and were excited to return for another round. One among them was Avonworth School District, which created a series of “Hi, Neighbor!” events as a hack last year.

At the kickoff event, teams bonded through creative challenges and learned about ongoing research from the Brookings Institution that explores the impact and role of family-school engagement around the world.

Yu-Ling Cheng, one of the directors of PAA, shared a range of information that helped the teams prepare for the design sprint ahead and gave them insight into the thinking behind the project. She also gave details about the mini-grant funding that will help each district build on their creative hacks during this school year.

One idea Cheng mentioned during the kickoff event actually sparked a hack that would be created during the design sprint by Deer Lakes School District.

Cheng shared a story about a teacher who kept what she called an Ask It Basket in her classroom. Children often ask questions that a teacher can’t delve into immediately without derailing a lesson. Or they pepper a teacher with questions unrelated to the day’s learning that just popped into their heads.

This teacher’s solution: She would have kids write down their questions and drop them in the Ask It Basket. That way, they knew their question mattered and an adult cared about giving them an answer. They also could write questions down privately without sharing them with the whole class. All of their questions would eventually get answered.

During the 14-week PAA design sprint this spring and summer, the Deer Lakes team dreamed up the concept of a virtual Ask It Basket specifically for kids and parents who are approaching the transition from fifth grade to sixth grade – that major move from elementary school to middle school.

When last year’s fifth graders toured the middle school, “our school counselor and a couple students worked closely to answer questions that the students had,” says Dr. Samantha Abate, assistant principal at Deer Lakes Middle School and a parent in the district. “But we then wanted families to connect with their children and see if there were any additional questions… that they could ask in a virtual Ask It Basket. And our goal was to make a frequently asked questions page to post out.”

As the next phase of the design sprint process begins, the 22 school districts will receive mini-grant funding from the Grable Foundation to put these and more good ideas into practice during the coming school year.

Along with creating a virtual Ask It Basket, the Deer Lakes PAA team is planning to use a portion of their mini-grant funding to reimagine their back-to-school open house. They plan to invite students as well as parents to the event, and combine the traditional presentation by teachers with social fun. Food trucks will serve dinner, giving families and teachers a chance to sit down together and get to know one another beyond academics.

“We’ll also have some events out on our football field,” Abate says, “where teachers and families and students collectively are interacting with one another kind of in an organic way.”

Siegel and Mengis served as much-needed mentors for the design sprint teams, many of whom had never used human-centered design thinking to tackle a complex puzzle like how to get parents more engaged with their children’s schools. Through Zoom check-ins and virtual office hours, they helped each team stay on track with their chosen aspirations and make new discoveries as they developed meaningful hacks.

One key thing Mengis and Siegel helped the teams to do: empathy interviews.

Educators on each team scheduled interviews with parents, asking open-ended questions including these:

Meanwhile, parents scheduled interviews with school staff to ask open-ended questions including these:

Many design team members had never conducted these kinds of interviews before, said Melissa Wagner, principal at McKee Elementary School in the West Allegheny School District.

“That was a very uncomfortable space for some of them to step into,” she says. “But when we came together, all that we gained from it was just so valuable.”

A parent/teacher empathy interview led directly to a hack designed by the West Allegheny team.

“One parent actually shared with one of our teachers that her own parents were not very involved in the school because they felt uncomfortable. They didn’t speak the language. So they did not get very involved in her education,” Wagner says. “But had they known that there was a community of Spanish speakers – other Spanish-speaking families at the school – they may have gotten more involved.”

Because McKee Elementary has a robust English-as-a-second-language program, the team used this empathy insight to design a great hack: Rather than just invite Spanish-speaking parents to tour the school, the PAA team redesigned the open house as a two-way conversation.

They invited high school students from the district who speak Spanish as their first language to serve as translators at the event. And through the student translators, the parents were asked: What are your hopes for your children this year? What are your fears? And what do you need from our school?

The event also included time for the parents to meet each other and connect, Wagner says: “Not only are we welcoming them into our community, but we’re trying to build a support system.”

For Mengis and Siegel, it was a rewarding experience to see how fully the teams embraced this process and used it to design so many unique and creative hacks. At the end of the design sprint, the whole group gathered at SLB Radio‘s studio inside Children’s Museum of Pittsburgh on July 13 to share their hacks and talk about how the groups plan to use their grant funding.

Along with sharing a meal and celebrating all that they’d accomplished, the teams shared some of the most powerful insights they took from the design sprint experience.

Educators and parents can learn incredible things from one another, and both sides want that.

Schools don’t always have to plan big events. Sometimes it’s more impactful to host a series of small events where a handful of parents and teachers can really speak to one another.

And perhaps most powerful of all: The pandemic has been painful for all of us, but it also has opened new doors of understanding and communication that can be built upon during this school year and beyond.

To learn more about the global Parents as Allies initiative, funded by the Grable Foundation, click here.

EdWeek is asking: Who are the ‘unsung heroes’ in your school district?

Kidsburgh Learning Guide: Making the most of maker learning

Future Ready Career Centers are on display this week across Pennsylvania