Photo above by Brea Schmidt.

I can’t open a bag of Skittles and not think about it.

Outside of a gas station that sat at the bottom of a hill on my route home from high school, I’d sit and wait with my dirty, #12 game jersey stuffed in my bag at my feet. I’d glance through the windows as my dad made his way from the candy aisle to the checkout still in his coach’s shirt. Then I’d look down, checking the status of the bruise on my knee courtesy of that loose basketball I went after.

When my dad made it back to our car, it was always the same: He’d open up the driver’s side door and toss the Skittles bag onto my lap. As he started the ignition, I’d get to work opening the bag. Then I’d dump a pile into his waiting hand before digging out my favorite flavor — orange, always — for myself.

It was different from our family’s usual “quickest way back to our house from the high school.” He and I had our own path home after games that always involved at least one extra turn.

Most times, over refills of his Skittles pile, while always making sure I had at least one orange one left for me, we’d chat about the game. I’d lead the conversation — sometimes breaking down that one play, often celebrating that good pass or sometimes just laughing about that errant one I threw

But sometimes, I didn’t want to say anything. Sometimes, I was tired or just too down about a loss, and I just wanted to go home. In those times, he never made me talk.  We just … went home.

But he always made the extra turn, taking that extra time. I didn’t get it then, but I get it now.

Because that turn and those Skittles? It was HIM creating space for ME.

He could have used the drive home to point out all of my mistakes. He could have said things like, “You played great, but…”

He could have made me feel the pressure to perform as a coach’s kid. He could have threatened taking away playing time if I didn’t try harder. So many times, he could have compared me to other players on the team.

But instead, he gave the floor to me.

Did we only talk wins and successes? Of course not. I had a competitive mentality, so we talked about my mental mistakes and how I could work through them. I led those conversations, and he helped me see the moments when I could have had more leadership on the court.  But we always did it positively.

I know not all kids had that luxury, and I know many today don’t either. Kids today are playing in a youth sports culture that looks so drastically different than it did for me and my parents in my playing years. The environment feels more intense and competitive at a younger age — and both kids and parents can feel it.

Ask anyone who attends youth sporting events and they’ll most likely tell you: It’s become the norm to hear parents screaming at umps or calling out their kids’ mistakes from the bleachers, or for opposing team fans to banter on the sidelines of a U7 game.

It can become way more about parents than it is about the kids.

Heck, even as a “doesn’t want to be that parent” type of sports mom,  I get caught up in it sometimes, too. I find myself putting unnecessary pressure on my 8-year-old kid who just wants to go out and play the game. And I sometimes wish I could take back that one thing I yelled out to my 10-year-old daughter from the sidelines of the soccer field.

I’m worried that we as parents are robbing our kids of their own experience. I’m worried we can’t set our own egos aside. I’m worried we’re not letting them find their own lessons in the game, because they’re mostly just worried about what we’re going to say about the way they played.

While I can’t control what happens around me, I can control how I parent my own kids through this experience. And sometimes I just have to remind myself to take the turn — to make that space — the way my dad did.

It means making sure that when they go out to play the sport they love, I’ve given them the tools to find their own pride, drive and desire to succeed for themselves — and not to meet my expectations or avoid disappointing me. It means taking a turn away from my own ego, and into an understanding that this is my child’s journey, not mine.

I know I want my kids to look back on their time as young athletes and remember what it looked like through their own eyes, and not how it lived up to the way it looked through mine.

Because when all the dirty-game-jersey days are gone, and the win-loss records are behind us, we’re all only left with the memories and the lessons learned.

(And hopefully the last orange Skittle in the bag.)

Let’s make sure they’re good ones.

Want more essays on parenting like this one? Check out Brea’s thoughts on mothers and mental health, business advice from Caitlin Thomas, info on helping teen girls approach their first periods from Brittany Cheeks and valuable advice on teaching kids about autism and other disabilities from Christina Abernethy.

Family road trip on just 1 tank of gas: Check out the Laurel Highlands

Expert advice: How to help teenagers with anxiety 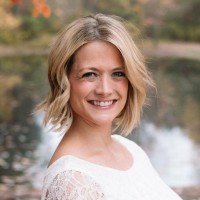 Brea Schmidt, creator of The Thinking Branch, is a writer, a photographer, an advocate for mothers and a lover of the journey behind discovering the meaning of life’s littlest moments. Visit thethinkingbranch.com.
Loading Comments...