As a young girl, Evelena McFarland was well known to her Hill District neighbors. Her mom sold chicken and rib dinners, and Evelena was the runner, delivering meals up and down Centre and Wylie avenues.

Her treks through the neighborhood included firsthand knowledge of the many influential personalities and cultural institutions.

“I knew Lena Horne when she lived on top of The Crawford Grill. I was 11 years old,” she says. “The Hill used to be booming. Everybody came. From East Liberty, the North Side, everybody had to come to the Hill. We had the Crawford Grill, the New Granada Theater, the Roosevelt Theater, jazz clubs. The Hill District used to be alive. …The Hill District had it going on.”

Now grown up into the Rev. Evelena McFarland, minister of Calvary Baptist Church, she is one of 25 Black women who shared their stories of the rich history of the Hill District neighborhood through “Girl Talk, Volume 1: Voices of the Hill District.” This project of Saturday Light Brigade Radio Productions is the first to feature strong, successful Black women connecting with Black girls through meaningful conversations.

The interviews, conducted by 29 girls between the ages of 11 and 17, took place over two years, with each woman interviewed by two to three girls. Their conversations lasted 40-50 minutes. SLB Radio staff guided the girls on how to prepare and conduct interviews.

“Girl Talk Volume 1: Voices of the Hill District” comes in the form of a full multimedia booklet and CD from SLB Radio. You can also listen to the recordings here.

The selected women cover a wide range of ages and careers. There’s a school principal, a minister, social workers and community activists, a college professor and police detective, playwright and artists. Each of their stories opens a lifetime of experiences to their young counterparts.

“We always had a goal of providing a program like this for girls in Pittsburgh neighborhoods,” says Chanessa Schuler, SLB director of programs. “When the opportunity came for us to apply for funding from McAuley Ministries Foundation, we were very excited about it.”

“Girl Talk” participant Terri Baltimore, director of neighborhood engagement and historian at Hill House Association, sees herself as a neighborhood tour guide, passing the baton of knowledge to another generation of Hill District residents.

As the oral history coordinator and archive specialist of the Teenie Harris Archive at the Carnegie Museum of Art, Charlene Foggie-Barnett digs into Hill District history on a daily basis. She shares that passion in her “Girl Talk”  interview.

“The Hill is more important than we realize,” she says. “I’m proud to be part of a society that produced great talents like August Wilson, a photographer like Teenie Harris, activists like Sala Udin. Prominent Pittsburghers who made a difference in people’s lives.”

“Girl Talk” was fostered through a partnership between the Jeron X. Grayson Community Center and the Oakland-based youth organization, School 2 Career. While the project’s mission is to empower the young ladies to use their voices, other goals seek to prepare the girls for the future.

“We want our girls to develop personal confidence required to explore post-secondary and career options,” Schuler says, “so that they may open their minds to what they can do.”

Since the release of the project, women from other Pittsburgh neighborhoods have inquired about having newer editions of “Girl Talk” to share their own stories. We look forward to hearing more. 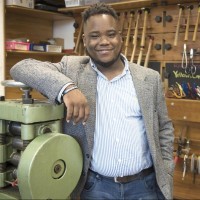