This is a love letter to all the dads I see at the playground, the library, the coffee shop and the park. An ode to the men who are “mothering.” We see you and we want to clone you!

Where did these men come from?

As a 36-year-old woman, I believe we’re the first generation of women who expect nothing less than a partner who will help us raise the kids 50-50. We’re able to expect that thanks to our mothers, and we’re strong enough to ask for it thanks to our fathers.

The second part of this male-mothering phenomenon is a direct result of the women who came before us:

The women who fought for Title 9 and tirelessly strived for an equal playing field. Our mothers, my own included, who were super smart with big-time corporate jobs and still had to put up with the ass grabbing, sexism and all the entitled men who didn’t think they should be there.

Our husbands saw all of this as young boys. They saw their mothers working full-time and the girls at school (us!) playing sports, taking AP classes and being smart, loud and sassy.

I’m not a scientist who studies human behavior, but here is my hypothesis: They didn’t know it at the time, but these boys internalized a deep appreciation for women as breadwinners and mothers. That appreciation manifested itself as grown men who are mothering their children with joy and ease.

The scientific evidence to back up my claims are the real-life examples I see with my #MomFriends.

My friend, Meredith, had her second baby four months ago. She also has a 2-year-old. She wanted to go away for a girls’ weekend but was nervous about leaving the kids. Her husband, Dave, encouraged and really pushed her to go.  He didn’t complain, he didn’t even blink an eye. He actually enjoyed his weekend with the kids and kept saying how glad he was that she could get away.

This might be TMI, but do you know how many men help their wives with breastfeeding?

Breastfeeding is amazing, but it’s also incredibly hard when you’re doing it for the first time. Your boobs are huge, you’re trying to get the baby to latch, you need help pushing the milk out and you don’t have enough hands! My husband sometimes held the baby and helped him latch. Other times, he pushed the milk out of my breast ducts because I was suffering from an infection and couldn’t get the milk to the baby.

All of my friends have similar stories. In fact, when we get together and swap breastfeeding stories, the dads talk as much as the moms because they were in the thick of it with us.

What I find incredible (and sexy!) is that these dads don’t think for a second that mothering makes them any less masculine. They all have their own professional interests and careers and are still manly as they thrive in this traditionally female role.

As they thrive in that role, so many of my female friends are thriving in the traditionally male role of breadwinner. Nearly 70 percent of the women in my circle are the breadwinners for their families. I’m proud to say that, and I want to recognize my dad and his generation of fathers who raised really strong girls. They taught us to speak our mind, own our space and make no apologies.

And so I guess this piece is really a love letter to my husband and my mom and my dad and all those like them.

The next step is getting to a place where we see a dad being very hands-on and stop acting like he is a unicorn and just accept it as normal, parenting behavior! 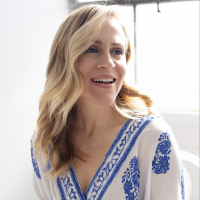 An Emmy award-winning journalist and TV host, Courtney Brennan has galvanized a huge online community around her very real and raw stories of #MomLife! A published writer, speaker and influencer, Courtney has become a strong and vocal supporter for mothers and families. You can follow her at @itscourtneybrennan on Instagram and @CourtneyBrennanTV on Facebook where she shares the realness that is #WorkingMomLife, her home renovations and those ever-important #OOTD.
Loading Comments...