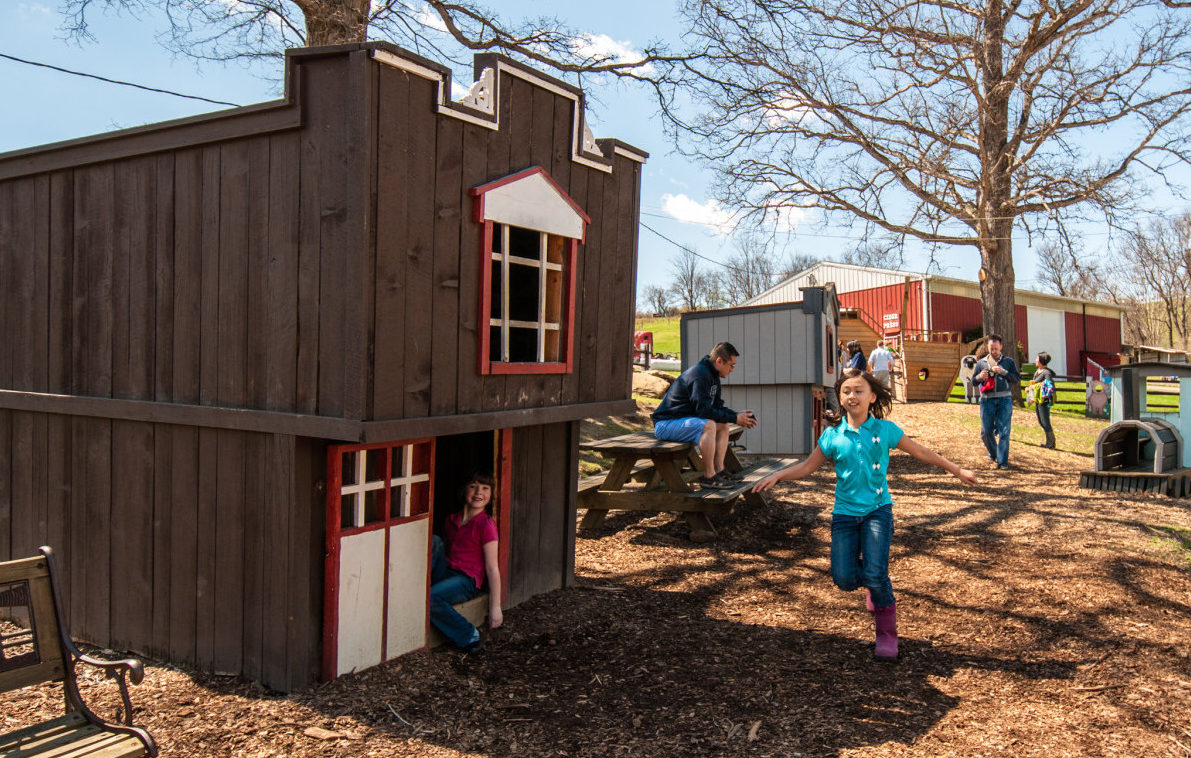 The air is crisp, nights are cooler, days are shorter and autumn celebrations are right around the corner. These 10 local farms, pumpkin patches and orchards make the most of this fleeting season with their annual fall festivals and other family-friendly activities.

Heading up Interstate 79 North to Soergel Orchards, you’ll discover one of the best-known family-run farms in the region. Just 20 minutes from Downtown Pittsburgh, Soergel’s has been in operation since the 1850s when John Conrad Soergel first settled on the spot and began cultivating apple trees.

Since that time, Soergel’s has become a favorite destination for many Pittsburgh families. Amenities include a western-themed play area, barnyard animals, pick-your-own berries, a weekly Monday story time, healthy and delicious kids’ meals, an allergen-friendly market and a collection of widely-attended seasonal events, including its fall festival.

Running from 11 a.m. to 5 p.m. every weekend from September 19th to October 25th, the festival includes all the usual perks of the farm, plus some extras. Families can pick their own apples, catch hayrides to the pumpkin patch, watch cider press demonstrations, play games and climb on a fire truck. Fall fare includes smoked barbecue and Amish doughnuts—a Saturday-only treat—and grownups can sample wine and hard cider from Arsenal Cider House, which recently opened a new location at Soergel’s.

Like Soergel’s, Shenot Farm & Market has roots in the 1850s when it began as a dairy farm. Over the course of its history, Shenot’s has been transformed into a working fruit and vegetable farm with a year-round market offering fresh produce, locally-sourced meats and cheeses and over 50 varieties of delicious fudge.

Though the farm is small–only 100 acres–fifth-generation Shenots have employed sustainable farming practices to grow and maintain the Wexford-based business. With the next generation on the way, Shenot Farms is still very much a working farm.

From 11 a.m. to 5 p.m. on weekends from September 26th to October 25th, Shenot will offer its annual fall festival. For $2 a person, families can take a hayride to the pumpkin patch while they munch on a homegrown apple. After picking pumpkins, families can wander through the free corn maze, enjoy a picnic or head back to the farm market for chef-prepared seasonal dishes featuring local ingredients. (We’re told the haluski is fabulous!)

Looking for a good scare? On Friday and Saturday nights in October, check out this year’s new attraction—haunted hayrides! Teens (13 and up) and adults can hitch a ride on a haywagon to a haunted house. Younger kids are also allowed to participate; purchasing “no scare” bracelets and necklaces will ensure that actors keep the spookiness in check.

Less than 15 minutes from Shenot’s, in Ohio Township, Reilly’s Garden Center at Summer Seat Farm sits on 82 acres of land once set aside for George Washington’s troops as “Depreciation Lands” in honor of their service during the Revolutionary War. The property still boasts historical features like a log cabin built in the late 1700s and a barn constructed in 1909. Since 1983, the farm has been owned by the Reilly family, who’ve restored the land to a working farm offering pick-your-own strawberries and pumpkins.

Reilly’s hosts a Harvest Festival from 10 a.m. to 4 p.m. every weekend throughout October. For just $7 per person, your family can participate in a variety of activities including hayrides, pony rides, a petting zoo, face painting and a cornstalk maze. While you’re there, check out the large selection of mums, asters, cornstalks, hay bales, pumpkins and gourds and enjoy caramel apples and refreshments from the country store.

On the outskirts of the picturesque South Hills communities of Mt. Lebanon and Upper St. Clair you’ll find McMurray, home of Simmons Farm. Adults and kids alike can enjoy apple-picking—the dwarf-sized trees make it easy for little ones to join in the fun! Beyond the orchard, Simmons offers cut-your-own flowers, baskets filled with seasonal produce and a cornucopia of fall activities—even on weekdays!

From 9 a.m. to 6:45 p.m. on Mondays through Thursdays and 9 a.m. to 5:45 p.m. on Fridays, Saturdays and Sundays, beginning September 19th, visitors can explore hay and corn mazes, a corn bin, an apple rock labyrinth, a petting zoo, slides—including one that’s 100 feet tall—and five acres of pumpkins. On weekends, extra activities include a butterfly hut, pumpkin carving display, apple picking, live music—and even an apple slingshot and a pumpkin catapult! Children under 33” attend for free; all others pay $11 for fall activities with a hayride or $14 for activities, a hayride and a pumpkin. From 7 to 9 p.m. on Saturdays, nighttime hayrides are available for $10. Stumble through moonlit hay and corn mazes and roast marshmallows around a bonfire.

In nearby Finleyville, Trax Farms has been a family-run operation for six generations. What began as a simple farmers’ market in the Trax barn has expanded over the years into an 85,000-square-foot market and garden center with 15 departments, including an antique loft, gift shop, craft beer, wine, herbs, produce and more! The award-winning fruit and vegetable farm has been hosting fall festivals for nearly a third of its 150-year history.

Situated on a hilltop in Monongahela, you’ll find Triple B Farms. Since 1967, Ron Beinlich has owned and operated the farm, first raising beef cattle and now growing fruit and vegetables—using sustainable agriculture practices—with his wife Carolyn, their son Bill and Bill’s wife Sue.

Triple B’s fall festival runs from 10 a.m. to 6 p.m. on weekends from Saturday, September 26th through the month of October. In addition to fall festival staples like pick-your-own apples and pumpkins, a corn maze and pony rides, Triple B boasts unique activities like an observation beehive, Storybook Pumpkinland—where 250 classic children’s characters come to life—and Pop’s Farmyard, where $6 provides access to a playground comprised of tractors and other farm structures, a hay bale jump, rope mazes, slides, hands-on learning stations and a tire mountain!

Schramm’s hosts a fall festival from 9 a.m. to 7 p.m. on Saturdays and 10 a.m. to 6 p.m. on Sundays throughout October. Scarecrows, cornstalks, gourds and other seasonal displays dot the pumpkin fields. Hayrides, pony rides and cornstalk mazes are among the activities available for a fee of $3 to $5 each. Schramm’s corn box—a giant sensory bin filled with dried corn, shovels and pails—is a hit with kids. Refreshments include French fries made from potatoes grown on the premises, apple cider slush, homemade candy and caramel apples.

Gearhard Farms in nearby Murrysville has operated its annual corn maze since 2000, but the farm’s history goes back over 240 years. In 2013, Gearhard Farms became the eighth farm in Westmoreland County—one of only 165 statewide—to receive a Bicentennial Farm Designation. To qualify, a single family must own a farm for 100 to 200 consecutive years with at least one family member making a permanent home on the farm. The family continues to grow field crops, including oats, hay and—you guessed it!—corn on 150 acres of land.

This year, the famous corn maze runs from 5 to 10 p.m. on Fridays, 12 to 10 p.m. on Saturdays and 12 to 8 p.m. on Sundays from Saturday, September 19th through Sunday, October 25th. The challenging, intricately designed maze is different each year; once complete, it will reveal a secret aerial message. The cost is $5 per person (cash only!)

Though food isn’t sold on-site, many families bring picnic baskets and take advantage of Gearhard’s campfires, where they roast hot dogs and marshmallows for s’mores.

In Clinton, located on the south edge of Raccoon Creek State Park, you’ll find Hozak Farms. Best known for its Christmas trees, which the Hozak family first planted in 1949, the farm began hosting a fall festival in the 1980s as a prelude to its busiest season.

Hozak’s free fall festival runs from 10 a.m. to 6 p.m. on weekends starting Saturday, September 26th and continues through Sunday, October 25th—including Columbus Day. The festival includes hayrides to the pumpkin patch and through the woods, pumpkin picking, painting, face painting, farm animals, music, refreshments and goodies from Wanda the Good Witch. Stop by the gift barn for pumpkins, cornstalks, mums, Halloween witches and scarecrows—and mark your calendars for a return trip to cut your own Christmas tree beginning in late November.

When cows were still milked by hand, farmers chilled cans of milk in stone buildings where natural springs ran. Taking its name from these buildings, the SpringHouse Dairy Farm in Washington was purchased by Sam and Bev Minor in 1975. Today, their son, Samuel R. Minor, manages the farm, which occupies over 400 acres of land. Samuel and his staff raise a mix of Holstein and Jersey dairy cows. All are raised without hormones and antibiotics and graze on fresh pasture grasses for three seasons of the year. Also on the property, the SpringHouse Market is a restaurant, market and bakery in one.

From 11 a.m. to 5 p.m. on weekends throughout October, SpringHouse hosts Great Pumpkin Weekends. Families can search for a perfect pumpkin, explore a sorghum maze, ride hillside and tube slides and enjoy a petting zoo, hayrides and more. For $10 per person, enjoy a hayride with activities and a pumpkin (the cost is $7 per person without the pumpkin.)

Vibrant foliage and mild temperatures make fall a wonderful time to explore our region’s idyllic farmland. Tell us about your family’s autumn adventures in the comments!