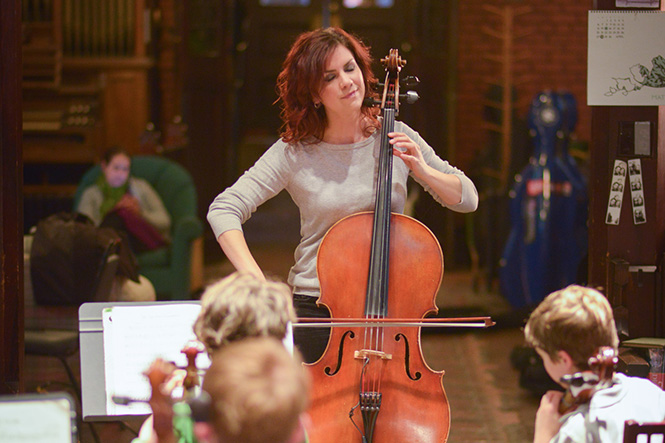 The secrets of inspiring kids with arts, from top Pittsburgh performers

On stage, Cello Fury lives up to its name. Reviewers have called the trio “classical music meets 80s heavy metal.” With Nicole Myers in the middle, the group’s two male cellists, Simon Cummings and Ben Muñoz, whip their long hair around to the beat and get lost in the splendor of the music.

The group doesn’t change a thing when they perform at schools for kids.

Myers loves to see their reactions, “especially to the first song that we play,” she says, “how intently they are looking. Sometimes some of the younger kids will air cello.”

And sometimes the kids will headbang along with the group, whose music begins with classical elements but sounds like a combination of movie soundtracks and progressive rock. That’s when Myers knows the Pittsburgh-based trio has reached these youngsters.

But how does a performer know how to design an educational arts program so that the performance will grab and hold the students’ interest from the start?

Cello Fury performs for kids at all school levels in several states, holds a rock camp for young string players and plays with school and community orchestras. Their educational aim is to interest kids in learning an instrument.

“The fact that they’re seeing something more unusual – it piques their interest,” Myers says. “Kids can really tell if you’re genuine about a performance,” she adds. So the group puts a lot of visible energy into their show – even more so in schools than for a general audience. The group also dresses in street clothes, not formal wear for the classical concert stage, to seem more accessible.

For the youngest kids, through second grade, “They don’t have as many pre-conceived notions about classical music or rock music, so we can combine those worlds from the start – and hopefully give them a launching pad for picking up an instrument and getting some lessons,” she says. For high schoolers, “you want to assume that they do know quite a bit about music and the instruments already.”

So the group talks about the technology that lets them amplify over their fourth member – a drummer – and how they get their sounds. They also talk about ways to achieve music careers.

Myers knows they’re clicking with the kids if they hear later from teachers that they have created a buzz – “that the kids are still talking about us.”

“Leave them wanting more,” agrees Carol Wolfe, director of education for East Liberty’s Gateway to the Arts, which has been sending arts performers into schools for assemblies and residencies since 1957, and offers professional development to teaching artists as well.

Gateway requires their performing arts educators to include a Q&A among the students at the end. And it’s the quality of the questions that signals whether the performance has made an impact, Wolfe says: “How many years did you go to school to learn that? What did this mean? When did you start? Basically they don’t want to leave.”

“Rule number one,” she says, “is engagement before information. Do not start out by just talking. You want to instantly grab them through your art focus. If you’re a performer, start out by performing. A class of fifth graders – that’s a tough crowd. You really have to prove to them right off the bat that you are worth listening to.

“You have brilliant musicians out there in the world who are not necessarily great teachers,” she notes. “A good performer or teacher is able to break down what they did” and give students a fascinating context for what was presented. “One of the worst things you can be is a ‘sage on the stage’ – that’s the boring teacher in schools who you didn’t want to do work for.”

The personality that a performer projects also counts for a lot: “Eighty percent of what you do is who you are.”

Gateway performers mold their performances to state educational standards, Wolfe adds, and to the age group: “The younger the audience, the more points of participation you need to build.”

For four years old, that means physical movement, even while sitting. “The youngest child’s body has to be engaged if their mind is to be engaged,” she says. “You like them to go on imaginary journeys with you.”

Performers also need to let the kids know that their art form isn’t entirely foreign. “You want to let kids know they have some skills and some competencies. Is this pitch higher than this one? See, you already knew about pitch.

“You’re giving them keys into that art form,” she concludes. “You’re inviting them in … You give them the tools to come in through that gateway and you leave them enriched.”

Today’s performers aren’t leaving their success to chance, she says: a lot of the artists are working directly with child development specialists to develop programs. Theater for younger kids requires lots of audience engagement, special lighting and eye contact, yet the presentations themselves have to be gentler, and contain ideas that are easy to convey.

“In a lot of international theater, the message isn’t as singular,” she says. “Each piece seems to have so many different levels. That’s my choice, especially in a multi-tasking society. When the child can go away from a piece thinking of many different messages, that to me is what makes a good piece of theater educational.”

In fact, she adds, “kind of being sneaky with it” is advisable. “It’s much more  artistic and rich if the audience needs to work for it a little bit. It’s better to allow for interpretation and discovery and more imagination in a piece.”

Tami Dixon doesn’t even want to use the word educational when it comes to Midnight Radio Jr. a program of Bricolage Production Company, which she runs as producing artistic director with her husband, Jeffrey Carpenter.

In Midnight Radio Jr., kids get to see a 1940s radio show being produced in front of them, with actors reading scripts and making their own sound effects. There are no curtains and no sets. “There’s a real magic that happens – it’s up to your brain for the setting of this piece,” Dixon says.

Instead of “core curriculum, standardized testing, and memorize this – when you’re able to take the word educational out of it, kids are able to take charge of their own learning process,” she adds. “We want to make them laugh, have fun, show them something they haven’t seen before, so they’re inspired to ask questions and at the end of the day they retain something they wouldn’t retain otherwise.”

Yet when Midnight Radio Jr. goes into schools, it adds some educational elements. The day’s script may focus on a school’s chosen subject, such as Gettysburg and the Civil War or a current program on climate change and its impact on the oceans. That’s a current script, which includes a fake commercial selling a “bubblehead” – your own portable ecosystem for when global warming happens. It also features a plot point about the Great Pacific Garbage Patch.

As well, the program includes a workshop on Foley artistry, the hundred-year-old practice of sound-effect construction that is still as analog as ever. The movies may use spray-can lids on rocks instead of coconuts for horse’s hooves, but they still need Foley artists. So kids get to learn how to make the bubble sounds for the bubblehead, and many other sound and voice effects.

In the end, it’s ultra-important that learning feel like playing, Dixon says. “We found from our work in schools that children are naturally retaining a lot of this information, because they are learning it not to memorize it, but to tell a story. The education stuff is a byproduct of our work in storytelling. 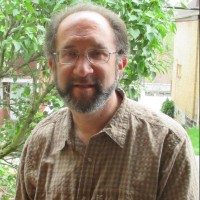