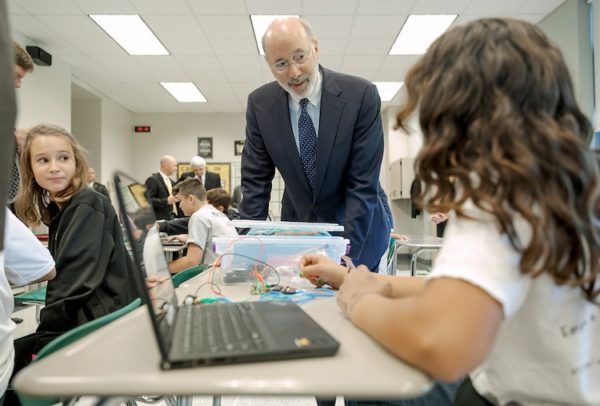 This guest editorial first appeared in NEXTpittsburgh, which publishes Kidsburgh.

In Pennsylvania, our youngest learners often discover the outdoors in pre-K. That’s when they learn that plants need water, that animals need plants, and that “In nature, nothing exists alone,” as the late ecologist and Pittsburgh native Rachel Carson once put it. Water and plants and animals are all part of an ecosystem, and for living things to thrive, their ecosystems have to be healthy.

Of course, this goes for more than nature—it also goes for kids. Their futures depend, in large part, on the ecosystems around them: their neighborhoods, schools and communities.

A child’s census tract, for example, can predict her adult income and even her life expectancy. It can shape every aspect of her trajectory, from the quality of education she receives to the opportunities she’s afforded in life.

Recognizing this, our sectors — government, education and philanthropy — have collectively invested tens of millions of dollars in the ecosystems that affect Pennsylvania’s learners. By supporting these ecosystems, we can help ensure that every child, from Erie to Easton, gets the knowledge and skills needed to flourish in a competitive, fast-changing world. Doing so will take an all-hands effort. Studies suggest that over the next decade, seven in 10 new jobs will require workers proficient in computers and code. By 2026, experts expect some tens of thousands of new STEM (science, technology, engineering and mathematics) jobs to be created across Pennsylvania.

Meanwhile, robotics and artificial intelligence will change society in rapid, remarkable ways. Already, robots are harvesting crops, cars are driving themselves and drones are delivering packages. And that’s just the beginning.

How Pennsylvania fares in such a world will hinge on how well our schools, districts, libraries, universities, businesses and others prepare today’s kids for tomorrow’s jobs.

That’s why in 2018, with input from hundreds of stakeholders in every corner of the commonwealth, the Wolf Administration introduced PAsmart: a groundbreaking initiative that has already driven $40 million to programs to enhance the state’s education and workforce development ecosystems.

Already, Targeted Grants from PAsmart have helped some 250 local education agencies launch or expand computer science programs, reaching more than 1,400 educators with professional learning. And by investing in the ecosystem approach, PAsmart injected $9.1 million into 24 Advancing Grants that focused on collective impact strategies for bringing STEM to our most historically underserved communities.

PAsmart has already reached each of Pennsylvania’s 67 counties and is helping entire regions take computer science and STEM to the next level. In the South Fayette Township School District near Pittsburgh, for example, an unprecedented partnership is shaping the lives of more than 4,000 students from every background and circumstance. Earlier this year, the district received nearly $500,000 from PAsmart to expand computer science not only for its own learners but also for those in seven neighboring districts across four counties.

Representing a microcosm of Pennsylvania, educators from each district are working together to identify crucial computer science skills and design new ways to teach them.

They’re learning to code, programming robots and sharing knowledge, technology and resources along the way. The result is collective impact: What benefits kids in one district also benefits kids in several others.

“This is the future of education,” says Aileen Owens, South Fayette’s director of technology and innovation. “Sharing and helping each other is how communities improve and thrive. It’s helping all of us become better at what we do.”

In Tioga, Lycoming, Sullivan and Bradford counties, a collaboration among 16 school districts, Mansfield University and the BLaST Intermediate Unit is leveraging private industry partnerships to build STEM Career Pathways. Students throughout the rural four-county region will have access to university professors, industry mentors and work-based learning experiences. Educators, meanwhile, will be provided with curricular resources to accelerate STEM inside the classroom.

Finally, the PA Rural Robotics Initiative is working with Clarion University, Carnegie Mellon University and local workforce investment boards across Allegheny, Armstrong, Butler, Forest and Venango counties to bring Robotics and Drone Labs (RAD Labs) to schools across the region. Student experiences in RAD Labs are mapped to the skills needed in the local engineering and advanced manufacturing workforce.

PAsmart is not Pennsylvania’s only investment in STEM. Through a collaboration between the PA Departments of Education and Labor and Industry, more than $3 million has been allocated to Teacher in the Workplace Grants over the past two years, and in 2019-20, the agencies will make available $5 million in grant funding.

Over the last three years, the Lancaster County STEM Alliance has connected educators with Messick, Case New Holland and Eurofins. Educators get to spend multiple days with industry partners helping them translate classroom experiences into the skills needed for the STEM workforce.

Extraordinary efforts like these extend far beyond South Fayette, Mansfield and Lancaster County. Pennsylvania boasts eight nationally and three state-recognized STEM ecosystems that span the commonwealth. Philadelphia and Pittsburgh were two of the first 20 communities across the U.S. to receive national STEM Ecosystem designation in 2017.

For more than a decade, one of them — called Remake Learning — has brought together nearly 600 schools, museums, libraries and other learning sites to equip Pittsburgh’s young people with high-tech tools and essential skills and mindsets.

Scientists, for example, partner with teachers and ed-tech engineers to develop new classroom apps. Coding boot camps partner with after-school programs to make STEM opportunities more engaging and more relevant, particularly for girls and learners of color who’ve long been underserved. The list goes on and on, and as ecosystems like Remake Learning grow, so does the number of partnerships, projects and Pennsylvanians prepared for the future.

And now they’re growing in a big way. This year, Remake Learning Days — an annual festival that gives families an up-close look at the future of teaching and learning — took root beyond greater Pittsburgh. It popped up in PA SEED — a four-county STEM Ecosystem in southeastern Pennsylvania — and in cities and towns nationwide.

After reaching 50,000 families, Remake Learning Days Across America will expand even further in 2020, coming to the ENGINE Ecosystem of central Pennsylvania.

Meanwhile, STEM educators from around the country are flocking to Pittsburgh, Philadelphia and everywhere in between to learn more about our state’s approach.

When it comes to raising future-ready kids, Pennsylvania has become a clear national model. But rather than stopping there, we’re doubling down instead: This month, applications will open for PAsmart’s second cohort of funding. With these grants, we’re proud to say that Pennsylvania invests more in STEM education and workforce readiness than almost any other state.

It’s our mission to ensure that every child in the commonwealth — regardless of their census tract — grows up surrounded by opportunities to learn and thrive. From Philadelphia’s core to Scranton’s suburbs to Elk County’s forests, our fates as Pennsylvanians are linked. In nature, after all, nothing exists alone.

Tom Wolf is the governor of Pennsylvania and chair of the Education Commission of the States. Pedro Rivera is Pennsylvania’s secretary of education and the president of the board of directors for the Council of Chief State School Officers. Gregg Behr is executive director of The Grable Foundation, co-chair of Remake Learning and outgoing chair of Grantmakers for Education.

All I want for Christmas: 25 Pittsburgh non-profits share their holiday wish lists