With the opening of Condor Court last week, the National Aviary is now the only accredited zoo in North America where visitors can see two pairs of Andean Condors, one of the largest bird species in the world.

The two male and two female Andean Condors—Lurch, Precious, Handsome and Lianni—can be seen soaring around a habitat that includes a 20-foot-high rock façade, perches and nesting caves, all designed to mimic the species’ natural habitat in South America’s Andean Mountains.

Condor Court is the latest in a wide range of Aviary exhibits dedicated to rare and endangered birds. But it’s also the first to fully incorporate the Aviary’s educational programming, conservation, field research and breeding into one exhibit.

“Condor Court inspires respect, understanding and appreciation of this species, its role in the natural world and our role in protecting it,” says Robin Weber, director of marketing and communications at the National Aviary. She also points out that the exhibit is just plain fun for everyone, offering an incredible view of the birds and a truly interactive experience.

The exhibit includes hand cranks that visitors can turn to aerate the condor bathing pools, a conservation station that mimics field stations used by Aviary scientists in Ecuador and an Ecobox where visitors can hear about global efforts to save this endangered species.

In addition to the Andean Condors, the exhibit is also home to a Bald Eagle, a pair of Pygmy Falcons (one of the world’s smallest birds of prey) and two Cabot’s Tragopan, a type of pheasant found in southeast China.

Andean Condor populations have experienced a steady and dramatic decline in Ecuador, and the National Aviary is playing a vital role in international efforts to protect them. It is also working with partners in Ecuador to establish a program to reintroduce new Andean Condor chicks back into the wild.

In fact, the probability of Lurch, Precious, Handsome and Lianni producing chicks is high. Condor Court was specifically designed to be the ideal setting for breeding and nesting. “If we do hatch chicks, the plan is to reintroduce them to the wild in Ecuador,” says Weber. But, presumably, not before getting plenty of attention right here in Pittsburgh first.

Condor Court and all of the National Aviary’s exhibits, including other birds of prey, can be seen every day from 10 a.m. to 5 p.m.

Lurch, a male Andean Condor, spreads his wings atop a perch in Condor Court at the National Aviary. Photo by Denmarsh Photography. 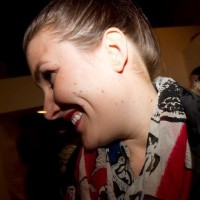 Deanna earnestly covers all the people and events that make Pittsburgh the best place to raise a kid. When she's not writing, you might find her running the streets of the East End. cooking big meals in her tiny kitchen, and spending time with her family.